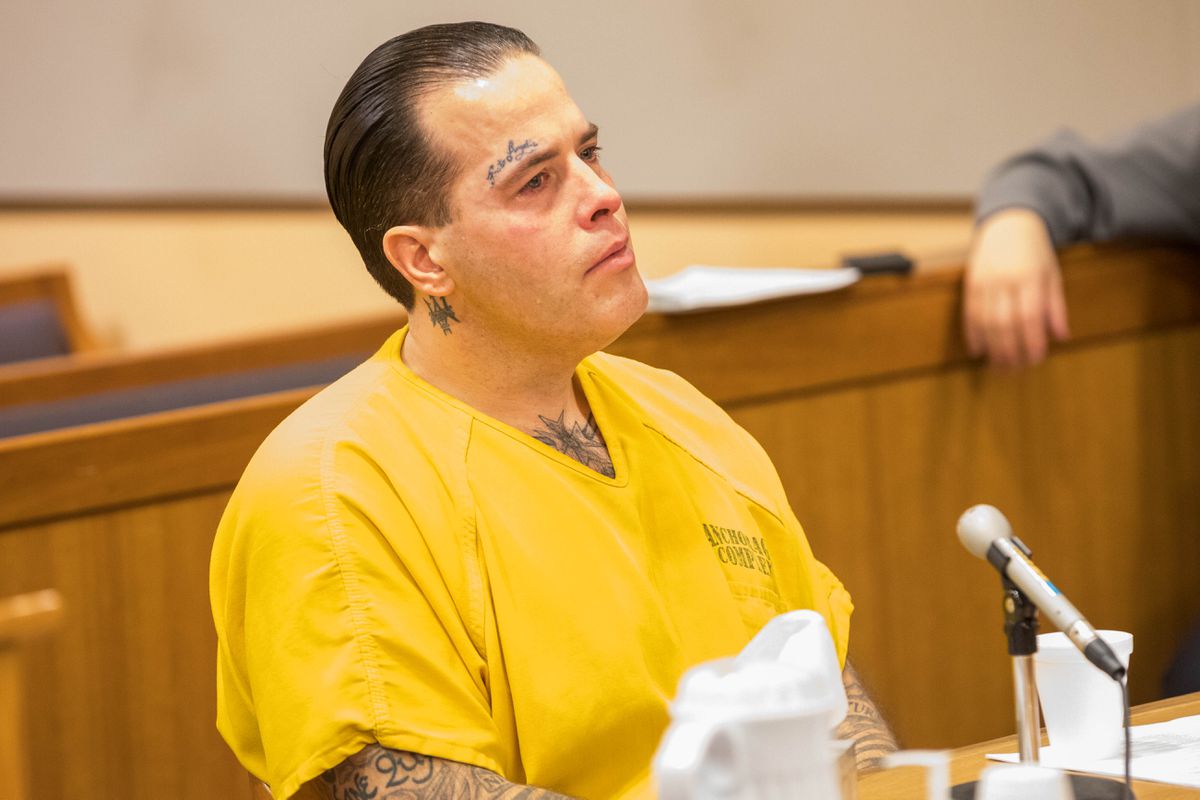 Jason Vukovich cries as he listens to his brother, Joel Fulton, testify about the physical, emotional and sexual abuse that their adoptive father subjected them to as children. (Loren Holmes / ADN)

At an Anchorage Superior Court hearing for Jason Vukovich, who was sentenced Monday for attacking three registered sex offenders, his older brother Joel Fulton said that despite counseling, he has not yet recovered from what the two men experienced as children.

“I’m never going to get better — never,” said Fulton, who has a successful career in cybersecurity in California.

At the two-day hearing that started Friday, Vukovich’s lawyer, Ember Tilton, argued for a more lenient sentence for his 42-year-old client, who attacked three men in June 2016, saying to a victim he was an “avenging angel” for abused children. Tilton said Vukovich continues to suffer through mental and emotional turmoil resulting from a childhood of physical and sexual abuse.

But the prosecutor, Patrick McKay, argued that there was no excuse for Vukovich to target and attack three strangers, beating one man so badly with a hammer that he fractured his skull and knocked him unconscious.

“We’re lucky we’re not dealing with a murder charge,” Assistant District Attorney Patrick McKay told the judge. “People do not get to take the law into their own hands just because they don’t like a particular group of people or a particular person.”

As part of a plea deal, Vukovich had previously agreed to plead guilty to first-degree attempted assault and a consolidated count of first-degree robbery. In turn, prosecutors agreed to dismiss more than a dozen other charges against him stemming from the attacks.

The men Vukovich singled out and attacked were complying with the law, Marston said. They had gone through the court system, received their sentences and put their names on Alaska’s public sex offender registry, where Vukovich found their addresses.

McKay said that in the summer of 2016, Vukovich, recently released from jail, carried a notebook with a list of nine names that he planned to target. Vukovich said he collected the names from acquaintances. He said they told him the people were “pedophiles.”

Over five days in June, Vukovich entered the homes of three of the men, uninvited. He hit two of them with his fists, and another man with a hammer. The attack left that victim with a lasting traumatic brain injury. It’s hard for him to string words into sentences. He lost his job. He can’t pay his rent.

“My life is changed forever,” he told the judge.

“I realize now that I had no business assaulting these individuals or taking the law into my own hands,” he said. “I should have sought mental health counseling before I exploded.”

Vukovich has cycled into and out of jail for decades.

As a child, he said, he and his siblings were abused by his adoptive father, Larry Lee Fulton.

“He was a pretty terrible person in general,” Vukovich told the judge. “He liked to administer beatings with various implements — belts, eventually a two-by-four that he had custom-made — and he used to like to disrupt the night by coming in to sexually assault (me).”

Fulton was found guilty of second-degree abuse of a minor and in 1989 received a three-year suspended sentence — meaning he didn’t have to serve any active time in a prison cell.

Vukovich’s older brother, Joel Fulton, eventually ran away from home and later he did the same.

Fulton went to college and later got a PhD. He lives in California with his family, where he said he has good job as the chief information security officer at a data analytics software company. He said he still receives counseling to deal with the trauma of being physically and sexually abused as a child.

Vukovich turned to drugs and crime.

Vukovich told the judge that he regularly used methamphetamine. He has eight prior felony convictions, McKay said.

Fulton told the judge he wasn’t friends with Vukovich and had spoken to him at most twice over the past two decades. Still, he said he wanted to help him and he asked the court system to do the same.

“Have mercy on him,” Fulton told the judge. “Help him.”

While Judge Marston expressed sympathy for the brothers’ childhood experiences, he said Vukovich has ultimately proved he is dangerous and “willing to hurt people.”