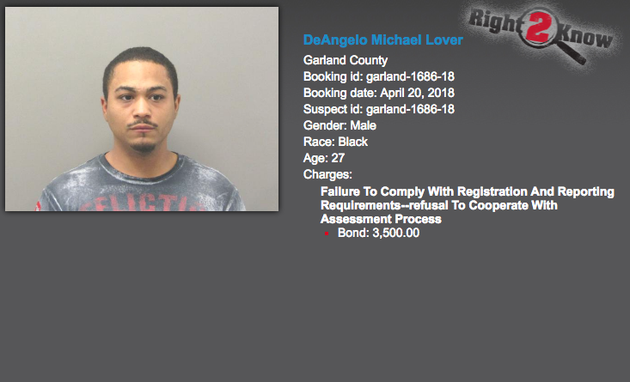 A registered sex offender was arrested on a felony warrant Friday for not disclosing to police a Facebook account he had been using for more than a year, authorities said.

DeAngelo Michael Lover, 27, of Hot Springs was arrested around 3 p.m. and charged with failure to comply with sex offender registration and reporting requirements.

Lover was previously convicted of sexual abuse of a minor and is classified as a Level 2 sex offender with a moderate risk of reoffending.

According to the probable cause affidavit, on Nov. 1, 2017, Lover appeared at the police department to fulfill his six-month registration verification requirement. While reviewing the paperwork, Detective Kenny May asked Lover if he had any social media accounts and Lover reportedly said he did not.

May told him it was legal for registered sex offenders to have social media accounts, but it was a felony not to disclose them.

Later that same day, May reportedly located a Facebook profile under the name “DeAngelo Stone,” and recognized the person in the profile picture as Lover, the affidavit said.

Authorities said Lover later admitted to having the profile and being active on it after being informed of the detective’s finding.

Lover said he failed to disclose it when asked before because he thought at the time that it was illegal for him to have, the affidavit noted.